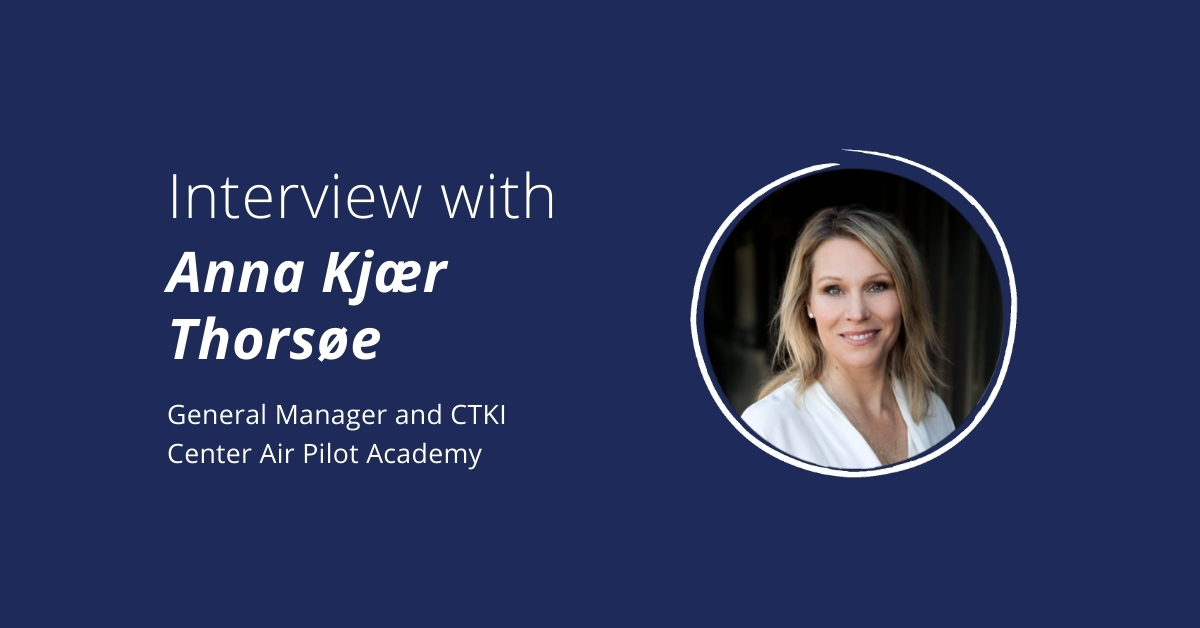 Aviation is an industry with a great potential for career development. As a part of Women Of Aviation Worldwide Week (WOAW), we interview one woman in aviation every day of the week. Today we would like to invite you to read a story of Anna Kjær Thorsøe who is a General Manager and Chief Theoretical Knowledge Instructor (CTKI) at Center Air Pilot Academy (CAPA) in Denmark.

Could you describe your journey into becoming a pilot so far?

“I grew up next to an airport, where the local flying club flew, among others, small veteran KZ airplanes, so my interest in aviation is as much in aviation history, veteran airplanes as well as actually flying. Initially I didn’t consider flying to be a career, before I found myself needing a visa to stay in the US. I asked myself what I would like to do, if I could start any new career I could think of, and aviation came to me right away. Besides flying airplanes, I also fell in love with the adventures it opens up for, and the people I met on my way.”

What obstacles have you faced while getting to where you are now?

“My IFR test was scheduled to take place on September 11th 2001. It got cancelled for obvious reasons, and of course the event formed not only my aviation career, but also my personal life, as I knew people who lost their life that day and I was in a relationship to one involved in US national security. It didn’t change my interest in flying, but of course my job possibilities were challenged afterwards. Not related directly to 9/11, but influenced by the event, I decided to move back to Europe and had to convert my FAA license to JAA (now EASA) license which I found more challenging than expected. Today I recommend others to do their pilot training in the part of the world they expect to work, to avoid conversions.”

What fascinates you the most about aviation?

“I think most pilots agree that it is basically fun to fly, and to get that feeling of freedom in the air, is unique to flying an airplane. Also being part of an international line of business is something I appreciate.”


What advice would you give to other women considering a career in aviation?

“Due to my job, I am in charge of recruiting new pilots to aviation, so why, male or female, should become pilots is a question I get a lot. My answer doesn’t differ a lot, it is basically that if it is what they really want to do, then they should just go for it and not regret later in life that they didn’t pursue their dream of flying! I realize that women might face different challenges than men, and it is sadly also my experience that not as many women as men choose to become a pilot. When that is said, other questions appear when women ask me that question and they often circulate around work life balance and motherhood. I do admit that is a real challenge! Aviation is still not ideal for women having children. It requires a lot of planning, but it also requires a willingness not always to be there physically for your children and maybe having to relocate to get a job.”

How can we get more women into aviation?

“To get more women in aviation, and especially into the cockpit, we need not only more role models, but the airlines need to create an environment where wages and schedules can fit into a modern lifestyle. I also think we need to be better to tell young women that here we have equal pay for the same job and that a woman can fly an airplane just as well as a man.”

In your opinion, what are some of the misconceptions about women in aviation?

Do you remember what challenges you faced during your training?

“I don’t think my challenges were any different than the guys, maybe except I didn’t know much about engines. And that is maybe one of the reasons women don’t become pilots, many are concerned they are not technically minded enough.”

Have you ever heard of Turi Widerøe, the first female pilot hired by a major airline? 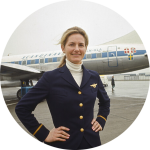 Turi Widerøe initially studied to become a book designer. After graduating she worked for printing companies and as a magazine editor.

Later she took a pilot’s education and became the first female pilot in a major airline in the western world.

In 1968 she joined SAS (Scandinavian Airlines System) and qualified as a first officer in 1969. She later was promoted to captain and flew the SAS’ first jet aircraft, the Caravelle and Douglas DC-9.

How about your students, what is the most challenging for them? What tools do you provide to ensure the best training experience for your students?

“At CAPA there are an average of 5 -8% female, and we don’t differentiate the training for them. We offer all our students a structured training based on SOP and especially we focus on our enhanced MCC-APS training where we use our own high end training devices like simulators and VR tools. Besides that we have a lot of focus on the individual student, keep a close track of their progression and test scores. If we see a diversion in results we set in quickly to help them in any way we can.”

Has the pandemic affected the training process?

“Sadly yes! Deciding to become a pilot is a big decision for all pilots, as it is the only self sponsored education we have in Denmark. But the pandemic has made that decision much harder. Even though the love of flying is still there, parents and banks, who inevitably get involved in the process, are hesitating to back them up for the time being.”

What are your ways to give extra support to your students during these times?

“In the last crisis, back in 2008, the banks turned down many applications for lending money to student pilots, so we established CAPA Credit. We have always been a financially serious company, so it was an easy decision for us to re-invest our money in the next generation of pilots instead of withdrawing the money. Today CAPA credit is for many the only way to finance their training in the cheapest possible way.”

Center Air Pilot Academy implemented virtual training as an immersive alternative to paper-based training for their students back in 2017. Using their mobile devices, students are able to practice procedures anytime, anywhere – whether in the academy, or from the comfort of their own home. This is particularly useful when travelling is not recommended or when flight schools turn to holding theoretical classes online during the pandemic.

If you could give one advice to women who are about to start their pilot training, what would it be?

“If you would like to become a pilot, then go for it. But be thoroughly in your research of training organisations and give it 100% if you do it. If you are not willing to do that, better do something else!”

Anna, thank you for taking the time to answer our questions. We wish all the best to you and all our friends at Center Air Pilot Academy.

If you enjoyed the interview with Anna make sure to come back tomorrow when we interview Janine Heldorf Olsson who is a Vice President at NetJets Europe. Stay tuned!

We use cookies on our website to give you the most relevant experience by remembering your preferences and repeat visits. By clicking “Accept All”, you consent to the use of ALL the cookies. However, you may visit "Cookie Settings" to provide a controlled consent.
Cookie SettingsAccept All
Manage consent

This website uses cookies to improve your experience while you navigate through the website. Out of these, the cookies that are categorized as necessary are stored on your browser as they are essential for the working of basic functionalities of the website. We also use third-party cookies that help us analyze and understand how you use this website. These cookies will be stored in your browser only with your consent. You also have the option to opt-out of these cookies. But opting out of some of these cookies may affect your browsing experience.
Necessary Always Enabled
Necessary cookies are absolutely essential for the website to function properly. These cookies ensure basic functionalities and security features of the website, anonymously.
Functional
Functional cookies help to perform certain functionalities like sharing the content of the website on social media platforms, collect feedbacks, and other third-party features.
Performance
Performance cookies are used to understand and analyze the key performance indexes of the website which helps in delivering a better user experience for the visitors.
Analytics
Analytical cookies are used to understand how visitors interact with the website. These cookies help provide information on metrics the number of visitors, bounce rate, traffic source, etc.
Advertisement
Advertisement cookies are used to provide visitors with relevant ads and marketing campaigns. These cookies track visitors across websites and collect information to provide customized ads.
Others
Other uncategorized cookies are those that are being analyzed and have not been classified into a category as yet.
Save & Accept
Powered by