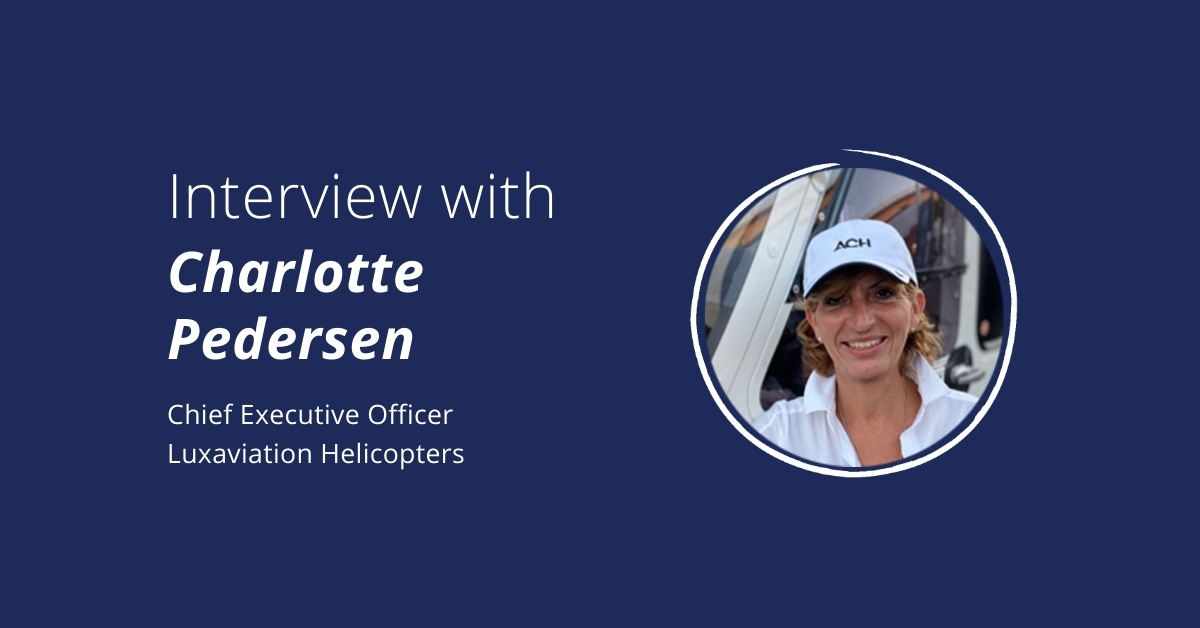 Women in Aviation: Becoming a role model for other women
Mar 12, 2021

On the final day of our interview series celebrating women of aviation we would like to recognize Charlotte Pedersen, who is Chief Executive Officer at Luxaviation Helicopters.

Why did she choose a military career and how did she get from the pilot to an executive role? Find out in our interview.

Could you describe your journey into becoming a pilot?

“In 1988, the Danish armed forces opened up for female pilot applications. I sent in my application and was the first woman to pass the pilot selection tests. I thus started my aviation career in 1989 when I entered the gate of “Flyvestation Avnø” to become a military pilot. “

What influenced you to consider a career in aviation?

“In high school, I attended a one or two week on-the-job training in the AirForce (mostly because I then could avoid a week of school) It however turned out to be very interesting and this was likely the start of my interest in aviation.”

Was your career in aviation always your dream job?

“No not at all, I wanted to be a veterinarian like most other children.”

What advice would you give to other women considering a career in aviation?

“I didn’t experience any real obstacles, but I have experienced headwind :-)) When I started in the AirForce, we were two women who joined the first class together, which was truly nice, because we had each other to lean against when things got tough. Back in 1989, there were no differences or adjustments in any military physical tests because of your gender- so you can imagine how much we had to train in the gym and on the running trails in order to keep up with the boys and still receive a good exam grade. Further to this, it was a different time and we had to listen to lots of criticism and arguments describing why we shouldn’t be able to become pilots. But we both passed all tests and exams and ended up as Airforce pilots on rescue helicopters.” 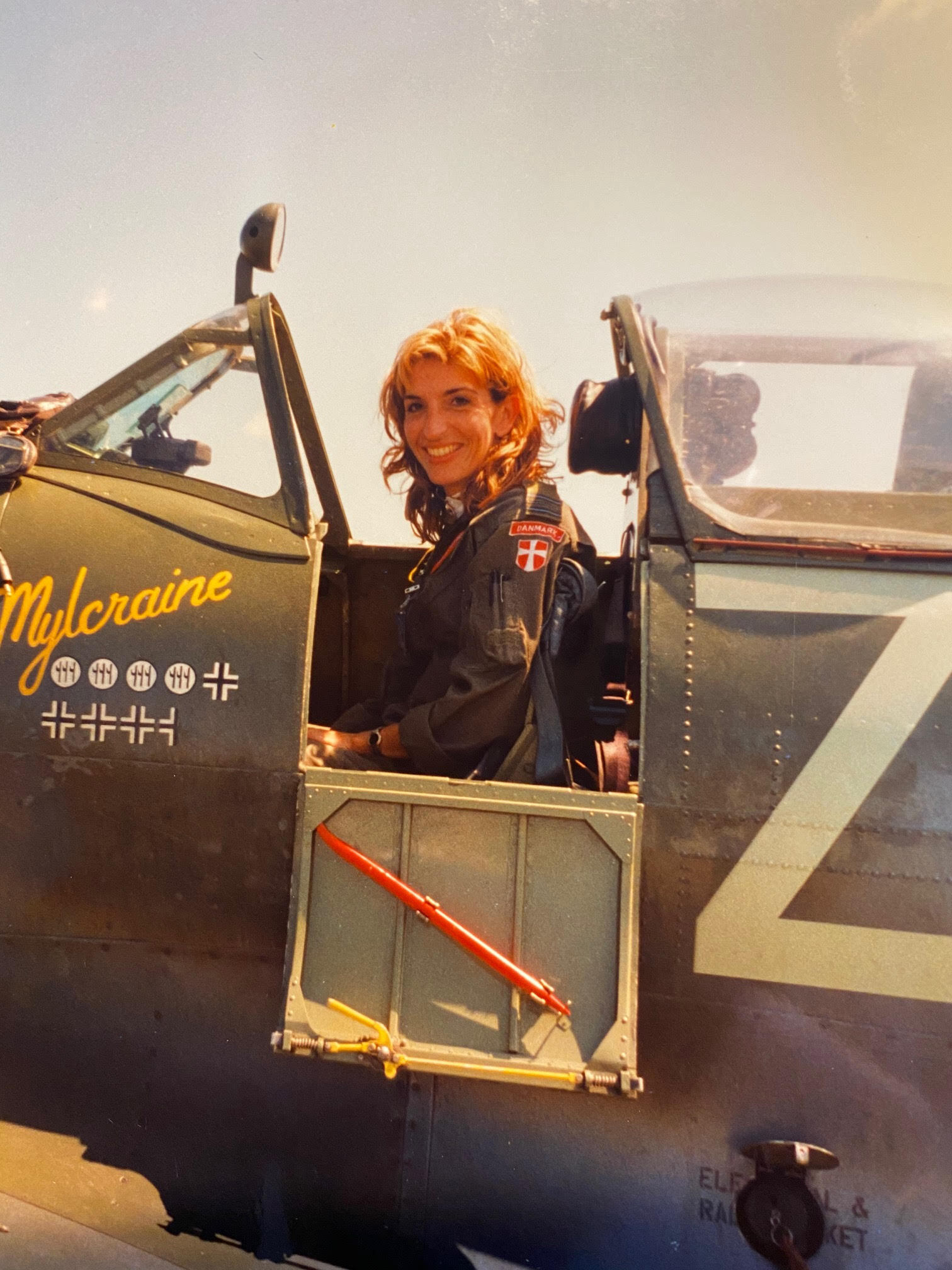 What fascinates you the most about aviation? What is the best thing about being a pilot?

What advice would you give to other women considering a career in aviation?

“I would say “GO for it”. I unfortunately spend the first 25 years of my career avoiding the magazines and the news and all the interviews. Like any other minority, you only wish to stand out, despite being a minority and not because of it. So I only attended interviews when I had done something outstanding etc.. What I realized afterwards was that I had missed out on the opportunity to become a role model for other women, because they didn’t see me and was not inspired to do the same. This I have changed now, and I attend as many promotional efforts as possible, in order to inspire others to go for your dreams.”

When we talk about aviation most of us would think of air travel, but it is a very broad industry. Charlotte, our today’s interviewee, started her career as a military pilot before she moved into an executive role. Here are some more examples of women who contributed to the aviation industry and opened the doors for others to follow their path.

Valentina Tereshova – Russian cosmonaut and engineer, is the first and youngest woman to have flown in space and the only one to have done this in a solo mission. In 1963 she was launched in the spacecraft Vostok 6, which completed 48 orbits in 71 hours.

The night witches – was a German nickname for the 588th Night Bomber Regiment, where everyone from the pilots, to the commanders, to the mechanics were women (during World War II). The all-female 588th Night Bomber Regiment dropped more than 23,000 tons of bombs on Nazi targets. And in doing so, they became a crucial Soviet asset in winning the war.

Svetlana Kapanina – the world’s best female aerobatic pilot. She is 39 times the World Championship gold medalist and 7 times the absolute world champion in aerobatic flying. She has also been a champion of the World Air Games 8 times and an all-round champion of this event twice.

How can we get more women in aviation?

“Aviation and transportation are such important factors in our normal life and also for a country’s GDP, and the sector is only growing and growing ( maybe not in 2020 but it will ignite again), so if we shall have enough young people to fill out the future positions, we cannot recruit from only 50% of the population. The problem is that still today, you get impressed if you meet a female pilot, which is not the way it should be. So we need to start the education very early and teach about this area in primary school already. It has to be normal, that you see female pilots, astronauts, ship captains etc. in the school books.”

In your opinion, what are some of the misconceptions about women in aviation?

“The greatest misconception is probably that it is a very difficult job to fly an airplane.. hehe .. so you don’t need to be a Superman or Superwoman to do so. “

What challenges have you faced during your training?

“Today at my age, the challenges for me are the same as for my male colleagues.. it gets more and more difficult to learn to fly new types of aircraft because of the avionics and the computer systems. My latest type rating was on a H145 helicopter and even though the machine itself is really easy and comfortable to fly.. I felt like a dinosaur when I had to learn what the 25 buttons on the cyclic were doing? Haha, I’m sure that the helicopter cockpit designer must have been below the age of 50 and not using glasses to fly at night.. :-)))”

Did you know that only 3% of CEOs in aviation are women?

According to the International Air Transport Association (IATA), only 3% of women worldwide are CEOs in the aviation industry compared to 12% female CEOs of any other sectors.

In 2018 the management of Air France appointed Anne Rigail as its CEO. That made her the first female CEO to lead a major airline.

Although we slowly start to see progress in achieving gender balance in executive teams worldwide, the aviation industry is still behind.

How did you get from a pilot to an executive?

“I started my career in the military and was therefore trained as an officer, which is an intense education in crisis management and especially people management, which are some of the most needed skills in business life, plus I like studying and learning new things, so one day, while I was working in a position of Flight Inspector for the Civil Aviation Authorities (and in the evening studying a Master in Business), the phone rang. I was invited for a drink with an entrepreneur who was starting up a global aviation business and who had been recommended to talk to me. I got convinced to change my career.”

Are you using some of the skills/knowledge you gained as a pilot in your new role?

“Yes absolutely! One of the best examples is to keep calm and continue with your leadership and priorities when everything else is burning. Resilience and the ability to cope with the unforeseen, which is a learning from aviation. Whenever you feel uncomfortable, it is likely because you are not well enough trained in the subject. The answer is then to go back and review and learn more and better. Organize yourself and try to simplify things in order to reduce stress and ensure that everyone else also understands what is going on. Another great learning from being a pilot, is always to have a plan B, and C and D. This means that you smoothly can react to change and that you calmly can lead your team during stressful situations. And then finally, I think the ability to create a great work atmosphere no matter what the circumstances are and to trust your colleagues and develop a successful team, is also a learning from being a pilot. And finally, remember to have fun while you work! Life is short so remember to enjoy! “

Are you still actively flying?

“No, unfortunately not. My license was current until 2020 but I have not renewed it this year.”

If you could give one advice to women who are about to start their pilot training, what would it be?

“Go for it, but do yourself a favor to have a plan B. This means, do not rely only on a pilots license but ensure that you also finish another education, so in case there will be more ups and downs in our industry- you have two horses to play on. And learning new things is fun, so it doesn’t need to be a burden to work on a plan B as well.”

Charlotte, thank you for taking the time to talk to us and for being a great role model for all the women in aviation. You have helped to open many doors that were kept closed for women for way too long.

If you enjoyed the interview with Charlotte, make sure to check out the rest of the interviews we did as a part of Women In Aviation Week.

We use cookies on our website to give you the most relevant experience by remembering your preferences and repeat visits. By clicking “Accept All”, you consent to the use of ALL the cookies. However, you may visit "Cookie Settings" to provide a controlled consent.
Cookie SettingsAccept All
Manage consent

This website uses cookies to improve your experience while you navigate through the website. Out of these, the cookies that are categorized as necessary are stored on your browser as they are essential for the working of basic functionalities of the website. We also use third-party cookies that help us analyze and understand how you use this website. These cookies will be stored in your browser only with your consent. You also have the option to opt-out of these cookies. But opting out of some of these cookies may affect your browsing experience.
Necessary Always Enabled
Necessary cookies are absolutely essential for the website to function properly. These cookies ensure basic functionalities and security features of the website, anonymously.
Functional
Functional cookies help to perform certain functionalities like sharing the content of the website on social media platforms, collect feedbacks, and other third-party features.
Performance
Performance cookies are used to understand and analyze the key performance indexes of the website which helps in delivering a better user experience for the visitors.
Analytics
Analytical cookies are used to understand how visitors interact with the website. These cookies help provide information on metrics the number of visitors, bounce rate, traffic source, etc.
Advertisement
Advertisement cookies are used to provide visitors with relevant ads and marketing campaigns. These cookies track visitors across websites and collect information to provide customized ads.
Others
Other uncategorized cookies are those that are being analyzed and have not been classified into a category as yet.
Save & Accept
Powered by